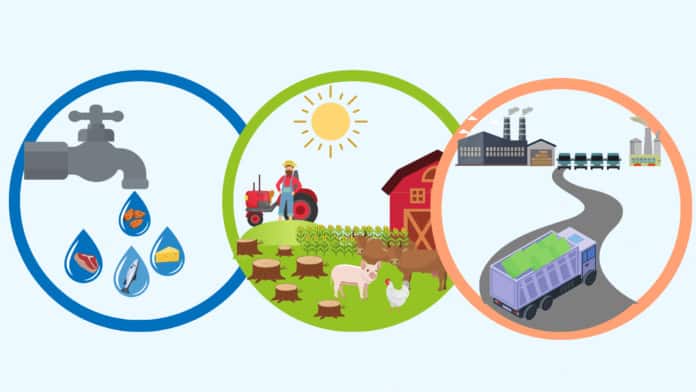 fIndustrial farming, massive crop plantations, and commercial food production are widely known to produce a tremendous impact on the Earth’s climate and environment in recent decades. Nowadays, with the food industry reaching its historical peak, data on the environmental changes caused by it starts looking more concerning than ever before.

Numerous studies prove an undeniable connection between farming and global warming. Expressed in numbers, food is held accountable for over one quarter (26%, to be precise) of global greenhouse gas emissions, just to begin with. In addition, about 70% of all freshwater withdrawals worldwide are used for the purposes of agriculture. Sounds concerning enough, does it not?

Today, we are focusing our attention on a number of critical questions, including what are the top environmental impacts of industrialized food production, what are their mechanisms of action, and what is there to be done about them by both decision-makers and ordinary people? Because asking yourself how to become a conscious consumer is not a matter of ego; it’s a matter of self-awareness and societal responsibility.

Below, you will find the top three ways in which livestock breeding, farming, and food production influence the ecosystems of the Earth – and also how exactly do they do it and to what extent.

As we already mentioned above, industrial food production is held accountable for 26% of all greenhouse gas emissions resulting from human-related activities. A study published in 2018 in the “Science” shows that the internal distribution of food production activities that generate the most significant emissions looks as follows: 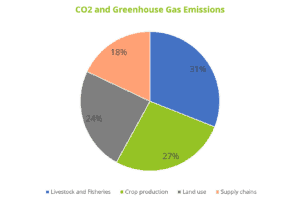 Among the products that contribute the highest percentage of greenhouse emissions are, for example, beef, lamb, cheese, chocolate, coffee, prawns, palm oil, and olive oil. The overseas distribution and long-distance travelling of goods also add to the final amount of climate damage.

Long story short: the unnatural food production and distribution habits of our century are producing over ¼ of global greenhouse emissions, thus generating an extra increase of global annual temperatures. What happens when global temperatures increase? Anything from severe droughts to heavy rainfalls, hurricanes, floods, and overall unpredictable weather all over the globe.

What can you do about it as an end-user?

Well, eating locally grown foods is the first and easiest way to spare at least half of the supply chain gases.

The second thing – sometimes thought of as the most decisive (r)evolution of our time – is embracing an environmentally conscious diet by reducing the amounts of meat and dairy you consume on a daily basis. Whether you like it or not, meat, dairy, and eggs account for 83% of dietary emissions throughout Europe only.

The third thing to consider is buying food that has been packed in a thoughtful and eco-friendly manner – with recycled materials used in minimum quantities.

Food Production and Land Use

A millennia ago, only 4% of our planet was what we nowadays call “wilderness” – a virgin, non-processed, natural land covered with rainforests, green fields, bushlands, deserts, and glaciers.

As of 2020, about half of the habitable surface of the Earth is used for agriculture. In comparison, human-made urban infrastructure covers only about 1% of our planet. So, we use about 50% of the habitable lands on Earth to feed the human population, based on 1% of the planet. Mindblowing, hm?

So, things work pretty simply. Humans cut out forests and diminish grasslands to turn them into farms and croplands. This is a total game-changer for all surrounding ecosystems, resulting in both increased emissions and reduced ability for nature to process them. What we get as a result is literally a “greenhouse” – and this greenhouse is called Earth. 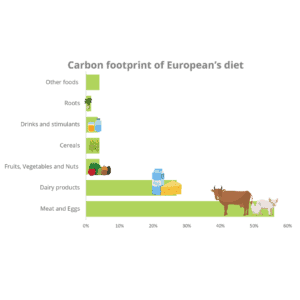 Once again, the foods that require the largest production spaces and generate the highest levels of pollution are beef and lamb, followed here by farmed shrimp, cheese, pork, chicken, and eggs. In the lower levels of the table, we find plant-based human foods, such as beans, peas, and nuts.

Speaking in numbers, the carbon footprint of Europeans diet is distributed as follows:

Fortunately, or not, the conclusion here is just the same: meat and dairy consumption is accountable for a large number of food-produced global climate changes. The production of these goods covers a super-large territory of the planet, turning into an unexpected threat to life as we know it.

Of course, there is much we can do about this, starting from ourselves. The paradox? We still don’t want to, although we know we have to.

Food Production and Water Use 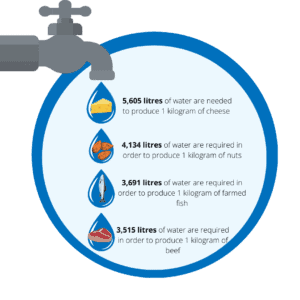 When doing so, we are faced with the following results:

Considering the freshwater scarcity in many regions throughout the globe, these begin to seem as rather striking amounts, especially when scarcity-weighted water is used.

Or else said: there is (obviously) something very wrong to deprive a large group of human beings of vitally important freshwater, just to water the rice crops planted a few kilometres away and intended to feed another group of people, right?

You can keep that thought in mind when deciding to consume some of the food products requiring a massive use of scarcity-weighted water: nuts, cheese, lamb, prawns, beef, or pork.

At the end of the day, demand determines supply. Every single human being matters and your choices are not yours only: they have the power to form opinions, spread awareness, and shape tendencies that can potentially be game-changing in the long run.

What every single one of us can do is mind their dietary habits, consider the origins of their food, and focus on purchasing goods with minimum waste on transportation and packaging.

In the long run, consuming large amounts of processed meat daily can happen to be equally harmful to both your own health and the future of our planet. Of course, everyone’s food preferences are their own concern, until they are not. Revering the tendencies in climate change is impossible without reversing the tendencies in human behaviour and attitude towards our consumption patterns.

Not ready to make a radical change to your diet? That’s okay. You can then start thinking about food waste and try to reduce the amounts of products you buy and later put them in the garbage bin. As of today, food lost in supply chains and consumer waste is responsible for about 24% of food’s emissions and about 6% of the total global greenhouse gas emissions.

The bigger your food waste – the bigger your impact upon reducing it. This means that businesses such as restaurants, food chains, and even local groceries are the ones able to make the most significant impact by merely finding a way to redistribute the products that they would eventually throw out. Or even better – optimizing their planning so that no waste would be generated and needed to redistribute.

Once you begin to change and evolve, you will see everyone around you picking up the trend. Because the time to grow is now, and sometimes growth means having less than before but being more than you were!

What are the three pillars of sustainable development?