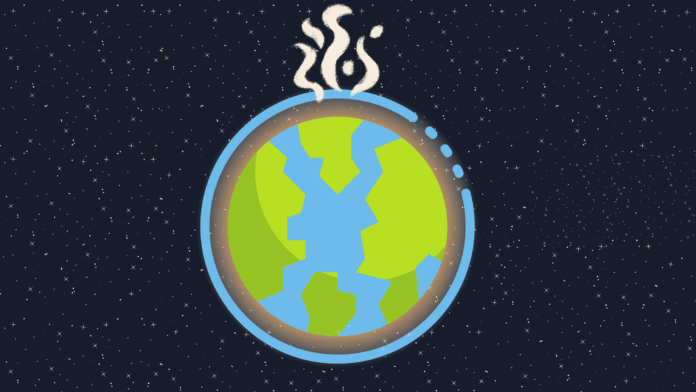 The rapid and ongoing changes in the Earth’s average temperatures are continually measured and addressed by hundreds of national, international, and non-governmental organizations worldwide.

Anyway, there is still a common misconception regarding some of the fundamental terms related to the subject: namely climate change and global warming. Intuitively, they seem like one and the same thing – merely because the current climate change tendencies are associated with accelerated warming.

Still, climate change and global warming stand for a different set of occurrences. It means that they have different preconditions, different postulates and mechanisms of unfolding, and finally – different causes. Today, we are shedding some light on the subject of global warming – what it is, what provokes it, how does it progress over time, and finally – what is there to be done about it.

What is global warming?

For the sake of perfect clarity, let us first clearly outline the fundamental difference between climate change and global warming.

Climate change is cyclic; it’s not at all unnatural, and it has actually happened many times throughout the history of our planet. Earth’s climate can change spontaneously as a result of both human-related and naturally occurring environmental processes – they include ocean patterns movement, volcanic activity, variations in the Sun’s energy output, fluctuations in the Earth’s orbit, and so on.

Global warming, on the other hand, is an entirely human-related occurrence. It is linked to the human population’s way of life after the pre-industrial period (1850-1900) and its unnatural impact on the climate of the Earth. It is said to have a significant influence on the alarming global temperature graphs for the last decades, producing abnormal changes in the Earth’s local, regional, and general heat patterns.

Put shortly: global warming is the long-term heating of Earth’s climate that happens as a result of human actions. Now that we have this definitive explanation, we can dig deeper into what generates global warming and how decision-makers can positively reshape the disturbing tendencies.

The global warming effect emerges as an unavoidable consequence of three main human population activities. These are the heavy fossil fuel burning, the massive deforestation, and the ever-increasing livestock farming.

Those three factors constitute the continuous generation of tremendous amounts of greenhouse gases in the Earth’s atmosphere. Added to the naturally occurring gases, they produce a catastrophic effect that our ecosystem simply cannot handle. What happens next is the so-called “greenhouse effect” – a situation where gases trap the sun’s heat and prevent it from flowing back into space where it belongs.

Logically, this leads to unwanted, unexpected, and rather unpleasant changes in how our Earth functions. According to the National Oceanic and Atmospheric Administration dataset, all the ten warmest years on record so far had happened during the 21st century. Just to let you know – 2020 is currently holding second place in this highly non-prestigious rank list.

Gases that contribute to the greenhouse effect 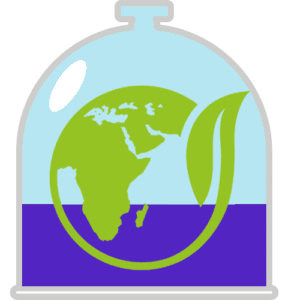 There are several gases that occur naturally in the atmosphere but are not meant to jump over a certain level of concentration. Higher emissions of them contribute to the greenhouse effect and its subsequent effects on our climate. These gases include:

Other greenhouse gases that accelerate the process of global warming include, for example, perfluorocarbons, hydrofluorocarbons, nitrogen trifluoride, and sulfur hexafluoride. They are released as a result of a variety of industrial processes, heavily misapplied by manufacturers all over the globe.

How is global warming linked to climate change?

Though climate change occurs naturally due to environmental phenomena beyond human control, human interference has dramatically accelerated the process in the past decades.

Speaking in numbers – in a recent report, the United Nations concluded that there is over 95 percent chance that human activity over the past fifty years has contributed to the ongoing global warming trend.

At the end of the day, combining natural and civilizational factors generates a steady increase in the global average temperature. That’s precisely how global warming and climate change merged to establish a startling tendency: the global average temperature had risen by about 1 degree Celsius since pre-industrial times and is presently rising by 0.2 degrees Celsius every next decade.

As a result of global warming, the Earth’s climate changes in many ways monitored from ground, air, and space simultaneously. Among them are the higher temperatures of the land and the oceans, massive ice melts, and more frequent severe weather conditions such as drought, heatwaves, and wildfires to begin with.

What are the causes of climate change?

As mentioned, multiple times already, the leading originator of rising greenhouse emissions is human consumer behaviour and lifestyle organization. The over-stacked supply needed to keep civilization going literally feeds on the planet’s resources and leaves it struggling with the resulting vapour waste.

The industrial production of food and goods, the movement pace of people and stock, and the continuous plantation of areas that used to be rainforests are the main culprits behind the greenhouse effect we observe. Below, we will discuss both human and natural changes to the climate in detail – one by one.

The most widely recognized and also most threatening human activities that provoke global warming and changes to the climate include: 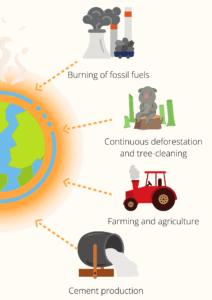 Adopting sustainable practices and conscious behaviour in these areas is both a societal and personal challenge. From the global decision-makers to local producers and end-users – there is something to be done every step of the way. And – yes – every single step matters a great deal.

Natural changes to the climate

As if human damage is not enough, several absolutely natural factors tend to worsen climate change even further. The most important among them, besides natural cycles themselves, include:

All in all, nature has its ways, and people were never supposed to interfere so viciously. What we managed to “accomplish” as a species is unprecedented, and the damage we’ve done is far beyond any terrestrial or extraterrestrial factor until now.

So, is there a way around catastrophe? The good news is that science says there still is. The bad news – it’s a way that has to be chosen consciously, taken immediately, and walked till the end.

Are we ready to go?

Read about the small changes that you can adopt in your day to day life and reduce your footprint:

What are the three pillars of sustainable development?